Whereas our nation is surrounded by urgent points that must be resolved, Congress is working laborious to burn part 230

This post will be unusually open about my disillusionment with the state of our country, a topic I don't normally discuss on the blog. Some of you will not like this post. I assume that my next post will feel more normal. However, if you come to the conclusion that you no longer want to read my blog, thank you for your previous readership.

If it is not obvious, I will vote for Biden in November without reservation. I know he said he wanted to withdraw section 230 immediately. We need Section 230, but we still need a change of president.

Until recently, I was able to follow and blog all of Congress's proposals to amend Section 230. The high volume of recent proposals has overwhelmed my capacity. Instead of full blog posts on each suggestion, this post takes a snapshot of the craziness in DC. It is a terrible proposal after another. Even more shocking is the fact that Congress is investing so much in Section 230 reform when many other issues need to be addressed urgently. I want to contextualize these critical political challenges that require Congress's attention so that we can recognize the misalignment of Congress's priorities and investments.

The challenges of the congress

Our country faces massive structural problems. The four most important topics that Congress should prioritize NOW:

I could list many other concerns that would in themselves cause scandals if Congress properly monitored the executive, e.g. B. Allegations that Russian has bounty on American soldiers' heads; the horrors of separating children from their parents at the border for punitive purposes only; the illogical and counterproductive efforts to prevent foreigners (such as students) from coming to this country; and so many more.

I'm overwhelmed by the work we have to do to make America great. Each of the bullets could easily occupy the full capacity of the congress. All in all, the congress should be fully tackled with urgent must-do-now priorities.

This is why Congress's work on section 230 is so confusing. Despite its long list of priorities, Congress apparently has enough capacity to produce a flood of new Section 230 reform laws:

EARN IT Act (p. 3398, Graham & Blumenthal). After a change in the manager, the bill was passed unanimously by the Senate Judiciary Committee and is ready for voting by the entire Senate. The invoice generally eliminates section 230 for all CSAM-related claims. I still plan to blog the version approved by the SJC. My previous blog posts on the pre-launch bill and pre-launch bill.

PACT Act (p. 4066, Schatz & Thune). The bill would remove Section 230 for most federal government orders and claims under federal civil law. This would also impose a number of procedural obligations on the editorial practices of UGC sites. Previous blog post.

End of support for the Internet censorship law (p. 1914, Hawley). This bill would grant section 230 immunity to large services only if the Federal Trade Commission certifies that they participate in politically neutral editorial practices. Previous blog post.

Stop the Big Tech censorship law (p. 4062, Loeffler). The bill would change section 230 to apply only if UGC websites take reasonable measures to prevent illegal content. It also requires viewpoint neutrality, imposes disclosure requirements on UGC websites under their terms of use and content restrictions, and removes Section 230's immunity from federal government law enforcement. (Some of these provisions overlap with the PACT Act).

Limitation of Section 230 immunity to the Good Samaritans Act (p. 3983, Hawley). The bill would require large "edge providers" to pass a TOS provision that says they operate the service in "good faith," and violations would result in civil damages of at least $ 5,000. The draft law defines "good faith" as "if the provider acts with an honest belief and purpose, adheres to fair trade standards and acts without fraudulent intent".

Bias Algorithm Deterrence Act of 2019 (H.R. 492, Gohmert). The bill states that a social media service would lose section 230 if it presented content in a manner other than in chronological order.

Other calculations related to section 230

SAFE SEX Workers Study Act (p. 3165 / H.R. 5448, Warren & Khanna). The only deserving bill on this list. This law would examine the effects of FOSTA – something that should have been done before the law was passed, but better late than never.

COOL Online Act (p. 3707, Baldwin, Scott, Murphy and Loeffler). The bill would oblige online retailers to display country of origin information in online product lists. It would change section 230 so that online marketplaces are only qualified if they trust the seller's representations in good faith.

SHOP SAFE Act (H.R. 6058, Nadler & others). Tiffany v. Partially tip over eBay. An “e-commerce platform” is liable for counterfeit goods that “mean health and safety” unless it meets ten different requirements for moderating content, which are specified in the invoice.

SHIELD Act (p. 2111 / H.R. 2896, Harris & Speier). The bill proposes to create a new federal crime for the distribution of non-consensual pornography. Although section 230 would not apply to federal crime, a UGC site would only be liable if it "intentionally requests or knowingly and predominantly distributes content that the communications service provider actually knows violates this section."

Other DC initiatives to destroy Section 230

NTIA petition to the FCC. We typically expect a government agency like NTIA to provide an intellectually honest assessment of the pros and cons of its actions and not to be brazenly partisan. No longer. This petition reads like an appeal notice that would receive a C- in a 1L legal writing course. It showed a poor understanding of the facts, the law, and political considerations; and it ignored obvious counter arguments. The petition is not intended to promote America's interests. It was designed to burn everything down. I hope the FCC will reject this, but even in this case malefactors will cite NTIA's petition in support of their deliberate misrepresentation of section 230.

DOJ Section 230 Palooza. The DOJ has released an anti-section 230 screed that also deserves all of the criticisms I have made against the NTIA petition, but more. It's a collection of partisan ideas designed to burn Section 230 down in a dozen different ways. The DOJ has so much to do to restore its public image after AG Barr's departure.

Personally, I cannot address Congress's commitment to "repair" Section 230 for at least three reasons. First, as mentioned above, Congress clearly has higher priorities. Second, more than ever, we rely on section 230 to enable critical services during shutdown. Without a robust and dynamic UGC ecosystem, shutting down our society and our economy would have done much more harm. It is counterproductive to target the law that makes this virtual bridge easier for our society when we need it most. Third, Congress rarely adopts forward-looking and well-designed technology policies. It is tragic that Congress has stopped developing such strategies. At this point, it can only demolish one of its most successful technological achievements in the past 25 years.

Because of the August break in Congress and the madness before the elections, there may not be time for legislation to pass this session. Depending on where we are, this would be the best result. There are less likely, but darker options, such as: B. Lame-duck activities or one or more bills that are carried over to a must-pass law.

Even if this is not the case at this session, it is clear that Congress will be forced to do something against Section 230. Whoever it is, the President campaigned for Section 230 to be lifted in 2021. All of these congressional staff have not worked hard to gut Section 230 to become empty. and there are ways to combine bills / form coalitions that could produce a Frankenstein bill that could be passed. (Remember that the CDA / 230 was a Frankenstein combination, as was FOSTA-SESTA). This is one reason why some Section 230 defenders blinked to find positive aspects of the PACT law, because when the alternatives are so much worse and inevitable that something will happen, choose the least worst option, Amirite? Honestly, if the PACT law authors had chosen one or two political ideas instead of the crowded dozen ideas now included in the bill, they might have quickly put together a successful coalition.

I fear that Congress will inevitably adopt a truly destructive Section 230 reform, and we will move closer to netflixing the Internet even faster. I wonder if we will look back at the “achievements” of Congress by the end of 2021 and feel like this: 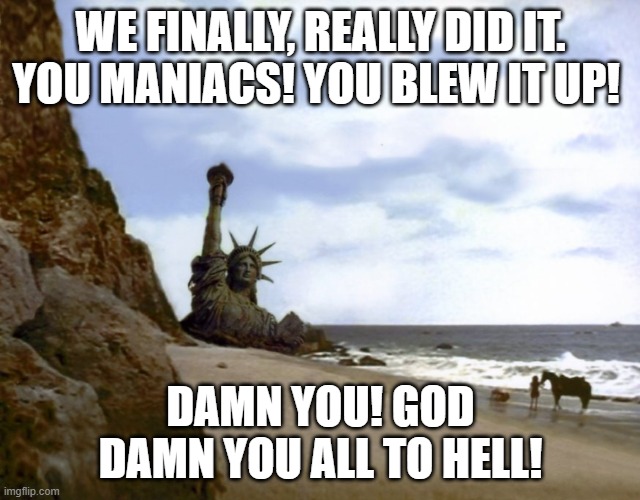 Many Americans believe that members of Congress are struggling to protect what we love most about the Internet. The reality is that so many politicians are doing the opposite. If you are part of one of the Congress members responsible for a bill on this list, tell them how you feel.

An Overview of Legal System of India