Hundreds of protesters and dozens of tricked cars gathered in a park in East Los Angeles on Saturday to commemorate the 50th anniversary of the Chicano moratorium, a peace march in protest against racial injustice and the disproportionate death toll of Mexican-American soldiers in the Vietnam War .

Speakers at Saturday's rally, resuming the power of the Chicano and revolutionary rhetoric of the 1970 event, called for the unity of Latin American and black communities to combat the oppression they said had not for the past half century had been defeated.

The mothers of young men killed in police shootings tearfully demanded justice for their sons while others in the crowd shouted, “Say the name, David Flores! Say the name, Alex Hernandez. "

In a concession to the novel coronavirus, participants remained largely masked and hugged to a minimum, though physical distancing itself proved futile at a rate that grew to just a fraction of the tens of thousands who marched on August 29, 1970.

This event started as a peaceful demonstration. But the day turned violent when the sheriff's MPs stormed Laguna Park and tried to disperse the protesters with tear gas and clubs. Three people were killed, including Times journalist Ruben Salazar.

The 1970 rally, which by then was the largest gathering of Mexican-American protesters in US history, is considered a pivotal moment in the Chicano civil rights movement. This year's event organizers note that some of the issues highlighted – including racial injustice and law enforcement brutality – remain painfully relevant to this day as police protests continue across the country against the deaths of black men and women.

Hundreds of people march down Whittier Boulevard to Ruben Salazar Park in Los Angeles on Saturday.

Saturday's march began in Atlantic Park north of Whittier Boulevard and ended about two and a half miles away in Salazar Park, the name given to Laguna Park weeks after March 1970.

When the demonstrators gathered that morning, about 50 Brown Berets from around the country stood in a circle while some of them spontaneously pondered the importance of the memorial.

"It's a sequel, not a celebration," said LA-born Lukas Tekolotl. “We're fighting for the same thing. That means we're not doing something right. We are not effective. We have to look back. "

In sharp contrast to March 1970, the Los Angeles County's Sheriff's Department stayed out of sight on Saturday, leaving the Brown Berets in charge of crowd and traffic control. They skillfully led the demonstrators slowly along the route, with several Aztec dance troupes in feathered headgear and obligatory masks showing the way. 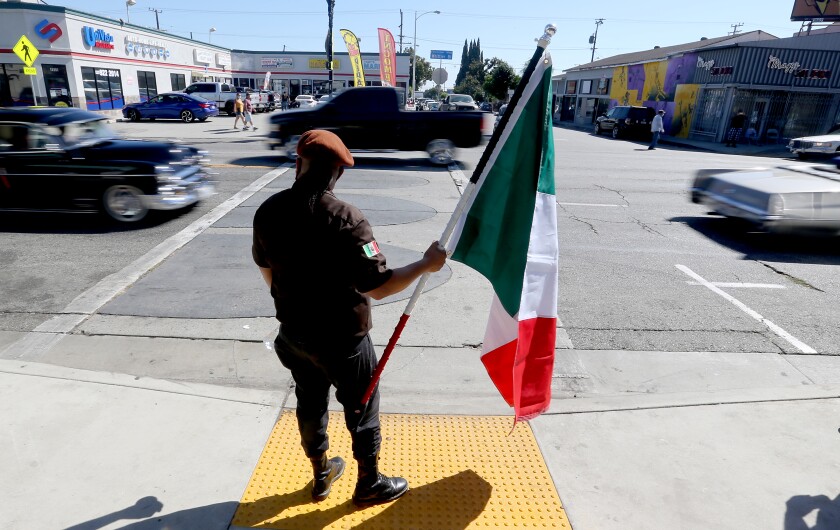 Members of the Brown Berets led the anniversary march on Saturday, which included a parade of vintage cars.

At the junction of Atlantic and Whittier Boulevards, protesters joined a caravan of vintage cars that eventually merged into a stalled parade of honking, screaming and waving signals.

One of the few tense moments of the day came when a woman at an outdoor restaurant stormed a protester who was taking her picture. Several brown berets quickly defused the scuffle. During the day the crowd remained calm and let their emotions be expressed through rhetoric alone.

42-year-old Sara Aguilar from Whittier took to the streets annually for the women's march and most recently for the Black Lives Matter movement. But as a Latina and recently a member of the Brown Berets, she couldn't miss the anniversary march of the Chicano Moratorium.

Next to her were brown berets from all over the country: Fresno, Houston, Chicago, Oregon, Colorado and beyond.

She grew up in East LA and hasn't seen much progress since she was a teenager.

"I don't think much has changed in terms of equality or treatment for a woman," she said. "That's why we're still out here today. It's not just a celebration, it's a continuation of our struggle."

She remembers that as a little girl at school she "learned that I can't speak Spanish and that I have to learn English".

"I am here to go back to my roots and fight for a future that is different for the children."

"We will march and once again claim who we are: la gente de Aztlan (the people of Aztlan)," said Avitia. “How the hell can we be illegal? We are native to this country. " The participants of the march rest in the shade of Ruben Salazar Park.

Those gathered condemned continued murders by Los Angeles County sheriff MPs and Los Angeles law enforcement officers, as well as racism against the Latino community by the Presidential Administration.

They repeated: “Revolution! No less “Black Lives Matter” and “Trump, Pence, out now! "to the beat of a drum.

Behind them followed a line of cars from which people waved Mexican flags and held signs saying "Chicanx Power".

Fifty years ago, Esther Aguilar marched with her sister and brother-in-law for the first time during the Chicano moratorium. 69-year-old Aguilar came to her hometown of East LA with her daughter Vanessa Valdez to march against police brutality.

"We have to keep marching for him," said Aguilar, pointing to the name Ruben Salazar on her shield. “And now for all these people who are dying. It's not fair and it's sad, sad, sad.

“Innocent children are killed by the police. It is wrong."

Valdez, 45, grew up listening to her mother tell stories about the 1970 protest. When she heard about the 50th anniversary march two years ago, she said to her mother: "Let's go!"

Her father, Victor Aguilar, a 73-year-old Vietnam veteran, gave the two women signs to march with: "It's a beautiful day to be a Chicana," said one. "I've been marching since 1970" and "Ruben Salazar, Que Viva!" said the other.

November is a chance to see change, both said.

"We all have to go out and vote," said Aguilar.

"The revolution won't wait," United Teachers Los Angeles president Cecily Myart-Cruz told the crowd gathered for the march. "We don't have another 50 years to get it right." Brown Berets greet Mexican-American journalist Ruben Salazar during a meeting on the grounds of the old Silver Dollar Bar in East Los Angeles.