A demonstration against the fatal shots at Dijon Kizzee on Saturday night ended with clashes of MPs and protesters outside the sheriff's station in South Los Angeles.

Hundreds took part in the protest against Black Lives Matter in response to the LA County Sheriff's MPs killing Kizzee, 29, in the Westmont neighborhood of Los Angeles last week. The crowd had shrunk when MPs declared an illegal gathering at 8 p.m.

A spokesman for the LA County Sheriff's Office said protesters had started throwing rocks and bottles at MPs and they responded with prickly balls and pepper balls. No arrests were made and no injuries were reported.

Black Lives Matter organizers did not respond to a request for comment.

The Dijon Kizzee family gathers with protesters outside the sheriff's station in south Los Angeles to seek justice for Dijon Kizzee.

At the demonstration, which began at 4 p.m., protesters called for law enforcement to defuse and pleaded with residents to stop L.A. County Dist. Atty. Jackie Lacey is out of office.

Authorities said two MPs from South Los Angeles train station tried to contact Kizzee on Aug. 30, who rode a bicycle in violation of vehicle regulations. The sheriff's department said they did not know which violations triggered the first stop because the MPs were not interviewed.

Kizzee dropped the bike and ran, said Lt. Brandon Dean. The MPs followed him and tried again to contact him on the 1200 block on West 109th Place. Dean said Kizzee punched one of them in the face. 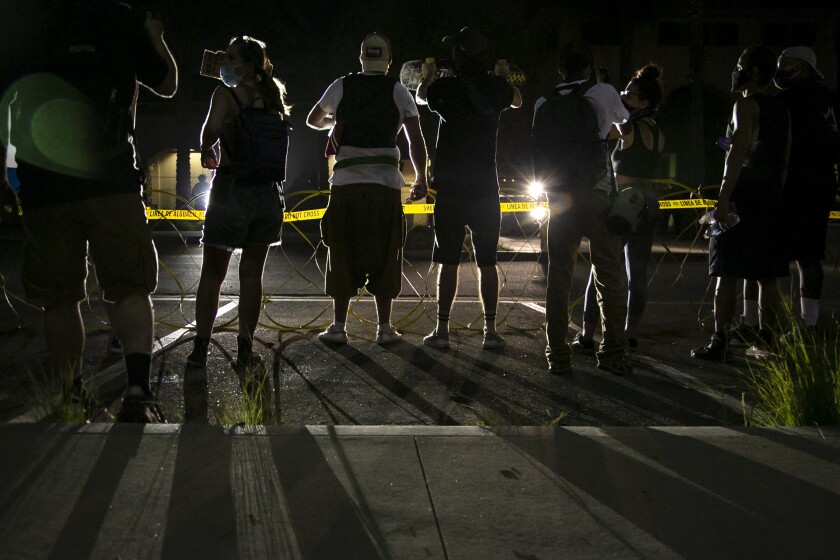 During a protest for Dijon Kizzee outside the sheriff's office in the South Los Angeles borough on Saturday, protesters are outlined by lights from MPs.

Kizzee dropped a jacket he was wearing and a gun fell to the floor, officials said. The sheriff's department said he made "a move towards" the gun and MPs opened fire and killed him.

Lawyers representing Kizzee's family said he was shot 15 times while running away.

The authors Alene Tchekmedyian and Teresa Watanabe contributed to this report.