After a meeting filled with charges and charges, the California Public Utilities Commission sacked Executive Director Alice Stebbins 5-0 on Monday. The sacking will take effect Friday.

Commission President Marybel Batjer announced the decision after a virtual meeting in which Batjer presented complaints about Stebbins' recruitment practices, followed by a 45-minute response from Stebbins and her lawyers.

Batjer did not address the decision made after the commissioners entered a three-hour closed session, but in their opening speeches Batjer accused Stebbins of making false statements during an investigation into the recruitment of an employee and cited her behavior, " appalling and shameful. ”

But Stebbins said she was fired for reviewing $ 200 million in unrecovered fees and fines from companies regulated by the commission and some of her employees, accusing Batjer of Stebbins' attempts of "a defect." in financial responsibility and integrity ”to have hindered the Commission.

Stebbins, their lawyers and supporters, who phoned during the public comment phase of the meeting also pointed to a cache of text messages from Batjer and other commissioners discussing the Stebbins case in violation of the state's Bagley-Keene Open Meeting Act.

"I have been told by the commissioners, and it appears from the text messages they have exchanged, that this hearing is the result of that hearing," said Stebbins. "President Batjer, Commissioner (Clifford) Righteous and Commissioner (Liane) Randolph told me that they decided to fire me before there was even a hearing or meeting."

Batjer denied in her 15-minute presentation before Stebbins spoke there was revenge against Stebbins, saying the $ 200 million figure was wrong. Batjer said there was $ 49.9 million in outstanding funds, but large chunks of it had not been recovered so far because the utilities appealed them so the money could not be put in your pocket until every case be clarified.

Batjer's remarks did not concern the text messages, but a commission spokeswoman told the San Diego Union-Tribune recently that there has been no violation of the Open Sessions Act and that personnel matters "have been discussed by the commissioners in legal, properly conducted closed sessions" .

Karl Olson, one of Stebbin's attorneys, said Bagley-Keene forbids "series meetings like this one in order to reach collective consensus, and that is exactly what you all have done … The commission has been over this law and Article I, section 3 of the California Constitution, which was passed with 83% of the vote and requires open sessions. "

The crux of the proceedings against Stebbins concerned some of the recruitments she had made in her two years as managing director – essentially chief of staff – of the commission that oversees private electricity, gas, telecommunications, water and transport companies.

A State Personnel Board investigation found that Stebbins appears to prefer hiring colleagues who previously worked with her on the California Air Resources Board and the State Water Resources Control Board.

The report said in one case that a manager who had previously worked with Stebbins was hired when the candidate was "inferior to some other applicants" and that "the scores of more qualified candidates were lowered to improve the ranking To reflect “Stebbins wanted to.

"You also took no responsibility for your behavior," said Batjer. “They did not express any concern about the affected candidates who participated in the recruitment process in question, or the morale of the current CPUC staff. Instead, you have repeatedly suggested that the Commissioners should use our political leverage to – in your words – make the SPB report go away. "

Stebbins called the report "flawed and inaccurate" and said she informed Batjer of the uncollected money earlier this year, but said the commission president was "dismissive". Stebbins accused Batjer, who was appointed by Governor Gavin Newsom in August 2019, of banning her from the meetings.

A Stebbins attorney, Therese Cannata, said five of the people featured in the State Personnel Board's report who were hired by Stebbins were each "objectively qualified by any standard" and were hired as part of Stebbins' efforts to increase commission responsible." 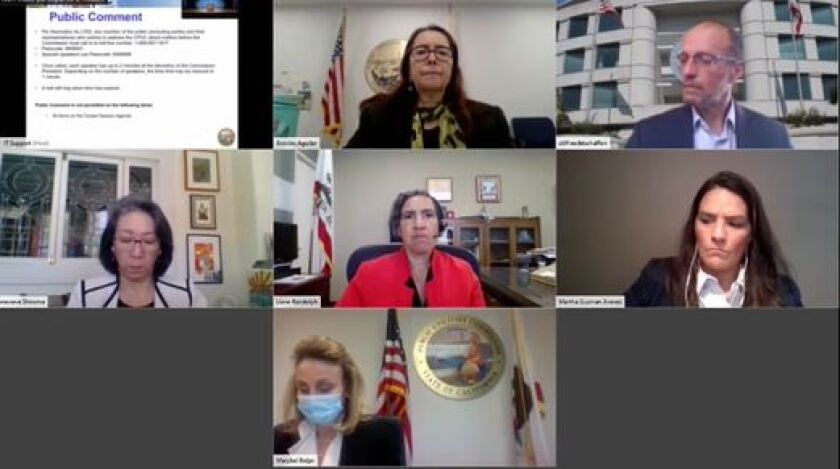 CPUC commissioners are holding a virtual meeting on Monday on the job status of Executive Director Alice Stebbins.

(Image from the CPUC livestream)

Olson noted that the commission waived a $ 200 million fine on Pacific Gas & Electric in May after it was found the utility company had neglected its equipment, which sparked a series of deadly forest fires in 2017 and 2018. The commissioners waived the sentence after PG&E argued it threatened the utility company's ability to raise billions of dollars in funding to get PG&E through bankruptcy.

"They gave PG&E a second chance … after it committed crimes that killed people," Olson said. "But you don't seem to want to give Alice Stebbins a second chance after the SPB questions some of her attitudes."

Batjer said Stebbins' future as an arbitrary employee was based on the findings of the Chief Human Resources Officer report.

"You have taken a number of actions over the years that question your integrity," Batjer said. “These actions, and your behavior in response to and in response to the findings of the report” – Stebbins' calls for $ 200 million in unrecovered fees and commissioners who ignore or disrupt their work – “prompt us to consider whether you can continue to serve as head of this agency. "

Olson said his legal team intends to file "this week as the first step in litigation for CPUC violating the Bagley-Keene Act and retaliation against whistleblowers."

The lawsuit, filed in the state appeals court on Monday morning, aims to prevent the CPUC from holding closed sessions without notice and "nullify any action taken as a result of such unlawful series gatherings."