The Los Angeles Times is committed to reviewing new motion picture releases during the COVID-19 pandemic. Because going to the movies during this time carries risks, we remind readers to follow the health and safety guidelines set by the CDC and local health authorities. We will continue to take note of the different ways readers can watch each new movie, including drive-in theaters in Southland and VOD / streaming options when available.

Nowadays it can be strangely comforting to choose a movie like "Peninsula", the third entry in the horror franchise "Train to Busan". The sequel takes place in a bleak future full of mad zombies and even more bloodthirsty villains. It is an attempt to expand the world that deviates from the rails when it reaches for glare over the depths and rounds off the successful film series somewhere between a whimper and a bang. Yet in the midst of all of the firefights and chases and man-eating action, it pegs down some truths to the genre: Zombies are simple creatures with simple, um, needs. It is people who complicate matters.

Most of director Yeon Sang-ho's refined science fiction vision is just enough removed from our own pandemic reality to serve as a welcome escape from the kaleidoscope of horrors of 2020. We meet Marine Capt. Jung-seok (Gang Dong-won, "Haunters") when he is fleeing the country with his sister and their family. He makes a panicked decision that will haunt him – but not as much as the tragedy that is unfolding on their escape boat to Japan, where passengers are unaware that the virus has found its way on board.

Gang Dong-won as Jung-seok in "Peninsula", the third film in the zombie series "Train to Busan".

Four years later, Jung-seok belongs to a group of expats who live in misery in Hong Kong. What used to be South Korea is now a zombie-infested, fallen nation isolated from the rest of the world. We learn this in an awkward portrayal of sleek white Westerners on a talk show. The Koreans blamed for the virus suffer from outright xenophobia and discrimination – an eerily forward-looking parallel to real life in the age of the Corona. Life is so miserable that Jung-seok, his brother-in-law Chul-min ("The Wailing & # 39; s" Kim Do-yoon) and two other desperate refugees return to their homeland when a tempting offer is too good to be true If you're retrieving a lost money cache, the idea doesn't seem half bad.

As it turns out, it's a terrible idea. Things are quickly going south, where director Yeon begins to enjoy pushing the boundaries of the world of "Busan". With an army of VFX artists available and cameraman Lee Hyung-deok viewing the faux-dirty sets in an artificial glow, he opens the doors of his cinematic universe into a new dystopian landscape in which the endless sea of ​​faceless zombies with Her terrible speed, her hunger for meat, and her heightened senses aren't really the ones to be scared of.

This award goes to the armed militia occupying a fortified outpost in the heart of Incheon (not to mention the opportunistic foreign gangsters behind the mission). Long ago abandoned by their own superiors, the soldiers, led by the suicidal-depressed Captain Seo (Koo Gyo-hwan) and the sadistic Sgt. Hwang (Kim Min-jae), created a nihilistic sub-society out of the ashes, the after Looks for supplies and places prisoners against zombies for sport. Here in Unit 631, desperation has turned barbarians into those who once served their land. And who can blame them, suggests the film in the subtext that we see mirrored today: In the face of the unthinkable, how would each of us, each nation or each people pass the ultimate stress test?

Unfortunately, attempts to write a major social commentary on the screenplay by Yeon and Ryu Yong-jae fail to set the bar for 2016's award-winning “Train to Busan” and the sublimely nuanced “Seoul Station,” the feature-length animated prequel Yeon made in the same year . "Seoul Station," a crushing charge of economic exploitation and neglect, follows as the epidemic first sparked amid a community's tragic lack of empathy. In "Train to Busan", egoism and greed for business are strongly combined in order to accelerate and intensify the literal dehumanization of the population.

Yeon raises the stakes on his trilogy ender and aims at the rafters, but neglects to meaningfully fill the space. In doing so, less convincing personalities and derived plot changes are unleashed on the wide open ruins of weightless, overly CG cityscapes, while he points to larger geopolitical gestures that do not hold together. 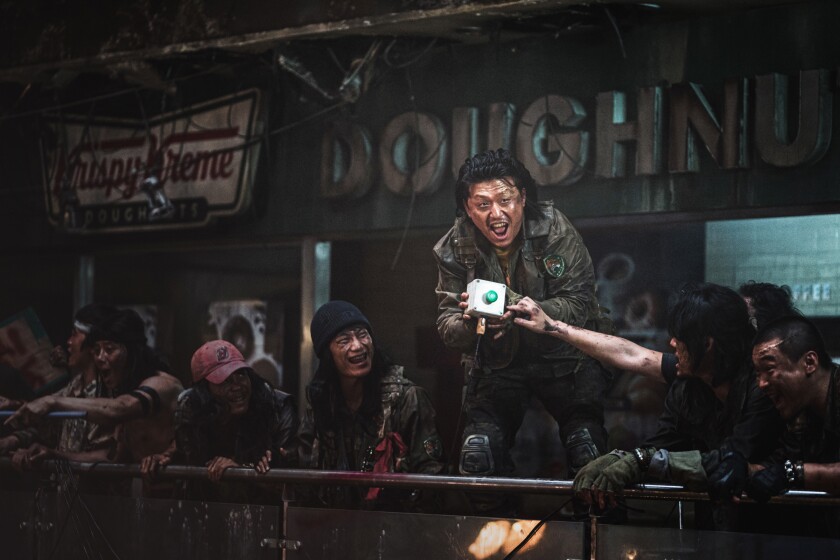 The barbaric Sgt. Hwang (Kim Min-jae, center) leads a unit of marauding former soldiers on the “peninsula” in the ruins of a former shopping center.

Bigger is not better, although some sets, like the zombie bait arena in the ruins of a shopping mall, set the stage for dynamic battle sequences. Without proper story development, the oversized scale of "Peninsula" is more likely to drown its characters before the zombies get a chance to take them down. One longs for the claustrophobic pressure cooker confines of this zombie-infested train.

Instead, “Peninsula” revels in fast-paced set pieces, including a spectacular 20-minute pre-dawn chase while its characters are drawn in large strokes. The results look very familiar to me. Sometimes it is reminiscent of two different "Mad Max" films ("The Road Warrior" and "Fury Road"), George A. Romero's zombie sequel "Land of the Dead" and, refreshingly, the "Fast & Furious" films. The last one turns out to be one of the movie's bright spots, enlivening a usable storyline when a young girl behind the wheel of a fast moving car drives Tokyo through hordes of zombies like the newest member of Dom Toretto's squad.

The young Drift Queen's name is Jooni (played by 14-year-old actress Lee Re) and zooms into the picture just in time with her precocious little sister Yu-jin (Lee Ye-won), an obsessed pint-sized RC car to steal the movie. If only the movie focused more on how these kids and their rock-hard mother, Min-jung (Lee Jung-hyun), survived the zombie-ravaged wasteland in the first place, or how they formed a makeshift family unit with the elderly Mr. Kim (Kwon Hae-hyo), the grandfather's ex-military officer, is still hoping for rescue. 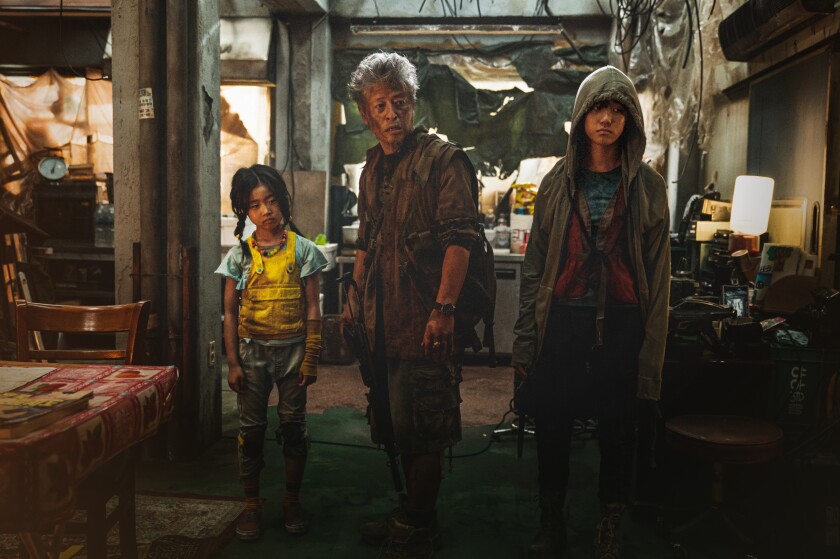 The 115-minute running time is more likely to hang on the shoulders of movie star Gang, who does his best to convey the torture of a man driven by a vague sense of … guilt? Loss? It's never clear or satisfying. As he shoots his way through the dystopian action of "Peninsula" and stirs up zombie headshots, a reworked score trumpets the emotional stakes with the subtlety of a Michael Bay blockbuster, as if Yeon doesn't trust the story to land with his own weight.

"Peninsula" wastes an otherwise powerful zombie metaphor by offering far less chew than its predecessors. The franchise is more successful when it shows in human moments how an apocalypse could force us to choose who we want to be. Take a cue: wear a mask, wash your hands, be kind to others – and watch Seoul Station instead.

(In Korean with English subtitles)

Play: Vineland Drive-In, city of industry and general pub where theaters are open